EAPGS Home
Pattern Index Home
Pattern Lists
-- Pattern Details
Browse by Maker
Browse by Motif
Browse by Shape
Advanced Search
BRYCE, WALKER & CO. No. 90 (OMN) line
• AKA: Hand and Bar
• Bryce, Walker & Company (Pittsburgh-PA, Operated: 1865-6/1882), Introduced: c1881
• NOTE: Sid Lethbridge: This pattern appears in the Bryce Bros. c1891 catalog that was used in the first US Glass compendium catalogs assembled and used in 1892. The catalog cut below with the table set is from a wholesaler catalog dated 1887 providing us with proof of an earlier production date.
NOTE: Paul Kirk Jr.: a butter dish with a lid that is unmistakably No. 90 appears in a patent illustration dated November 22, 1881. The patent was not for the butter dish, but for a detachable handle from J. B. Timberlake. Obviously this pattern must have existed at least by October 19, 1881 when the patent was filed. This dating assigns the origin of the pattern to Bryce, Walker & Company rather than to Bryce Brothers.
• Motifs: (People/Body Parts), (Plain) 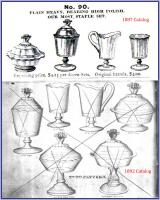 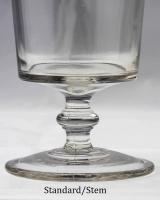 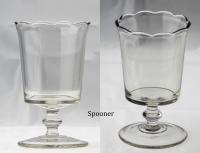 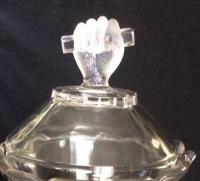 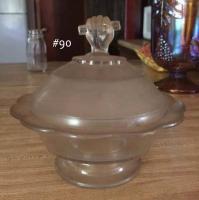