EAPGS Home
Pattern Index Home
Pattern Lists
-- Pattern Details
Browse by Maker
Browse by Motif
Browse by Shape
Advanced Search
CAMBRIDGE GLASS CO. No. 2627 (OMN) bowl
• AKA:
• Cambridge Glass Company (Cambridge-OH, Company Operated: 1902-1958), Introduced: 1906
• NOTE: Previously it has been thought that these Cambridge nappies had been been made earlier at two National Glass Co. factories as No. 318 at the Royal Works and No. 420 at the IT&G Works. However there is some evidence suggesting that Cambridge No. 2627 is actually a look-a-like pattern.
• Motifs: (Fans), (Octagon) 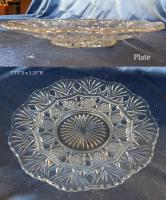 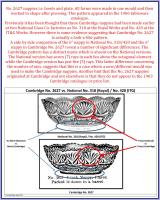