EAPGS Home
Pattern Index Home
Pattern Lists
-- Pattern Details
Browse by Maker
Browse by Motif
Browse by Shape
Advanced Search
BEAR (AKA) b&s
• AKA:
• Boston and Sandwich Glass Company (Sandwich-MA, Operated: 1825-1887), Introduced: Unknown Date
• NOTE: Listed as either pomade or match safe. Sizes:3.75H; 4.5H;5.5H;8.5H last 2 HTF or rare
NOTE: Jim Masterson: Mint examples are extremely hard to come by as the head was sealed on the body then wrapped in some kind of tape. They were opened by prying them open with a knife, hence the frequent head/neck damage.
NOTE: Roger Haworth: There's a year 2000 article by A. C. Revi in the Glass Collector's Digest that shows an 1854 British Registry Design for the bear. Revi implies but doesn't actually state that the bears were made in Britain, leaving the question open. There's too much evidence that Sandwich made most, if not all, of the bears, but the design information does add a little mystery.
NOTE: Sid Lethbridge: These appear in an 1888 wholesale catalog labeled as a Bear match safe.
• Motifs: (Animals), (Figural) 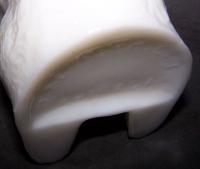 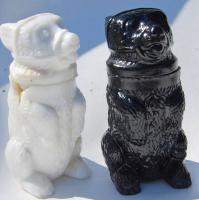 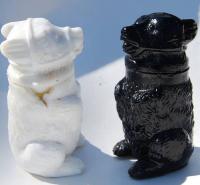 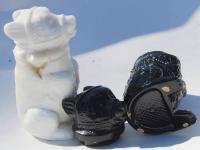 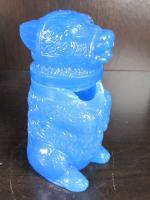