EAPGS Home
Pattern Index Home
Pattern Lists
-- Pattern Details
Browse by Maker
Browse by Motif
Browse by Shape
Advanced Search
BATTLESHIP MUSTARDS (AKA)
• AKA: Flaccus Mustards
• Multiple Makers, Introduced: c1898
• NOTE: Sid Lethbridge - The Remember the Maine battleship was made by McKee & Bros. and has been reproduced. The other battleships are generally believed to have been made by one of the Flaccus companies. The Flaccus story is convoluted because there were a couple of different Flaccus packing (mustard, meat,etc.) companies both of which used glass containers. Flaccus Bros. made their own glass containers in a factory in Tarentum and E.C Flaccus contracted out for their containers. The ships with gun batteries fore and aft were made by Flaccus Bros. The examples with a modified fore structure were made for E.C. Flaccus, a Wheeling based packer. The maker of the version with Uncle Sam in unknown. The Uncle Sam battleship has been reproduced and was sold by AA Imports in the 1970s.
• Motifs: (People/Body Parts), (Figural) 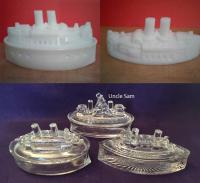 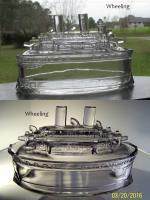