EAPGS Home
Pattern Index Home
Pattern Lists
-- Pattern Details
Browse by Maker
Browse by Motif
Browse by Shape
Advanced Search
ABC PLATE [ANIMAL] (AKA)
• AKA: Animal Center
• Crystal Glass Company (Pittsburgh-PA, Operated: 1869-1890), Introduced: December 1879
• NOTE: Sid Lethbridge: Crystal Glass Co. of Pittsburgh brought out "four patterns of ABC plates for children, etched bottoms, one bearing the figure of a lion, another of a stork, a third of a rabbit running, and the fourth with a rabbit at rest." in December 1879
NOTE: "Among new things offered for the holiday trade are some very handsome goods now being made by the Crystal Glass Company, Southside. These consist of an oval bread plate, with the beehive surrounded by flowers, with bees and butterflies and the words "Be Industrious", etched on the bottom; a round bread plate with a little girl carrying a basket of flowers, also etched; four patterns of ABC plates for children, etched bottoms,
• Motifs: (Animals), (Letters/Numbers) 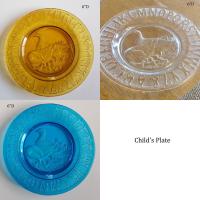 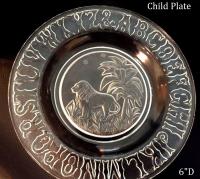 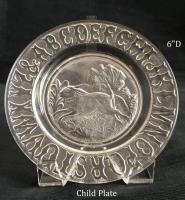 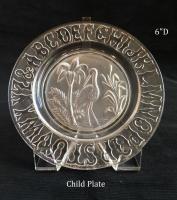 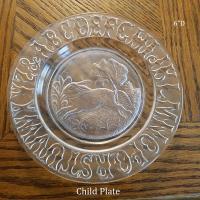