EAPGS Home
Pattern Index Home
Pattern Lists
-- Pattern Details
Browse by Maker
Browse by Motif
Browse by Shape
Advanced Search
THUMBELINA (AKA)
• AKA: Diamond Fan (MAGWV).; Flattened Diamond (Lechler); Flattened Diamond and Sunburst (Heacock)
• Westmoreland Specialty Company (Grapeville-PA, Co. Operated: 1889-1924), Introduced: 1910
• NOTE: Sid Lethbridge: "Thumbelina is an AKA for a series of Westmoreland toy glass pieces with the same design motif. The toy table set with handled sugar and spooner was designated as No. 299, the toy table set without handles on the sugar and spooner was No. 301 and the punch set was No. 303." Thumbelina (aka) was originally produced in clear glass only. A 3-piece set in milk glass was issued in the 1950s.
NOTE: Paul Kirk Jr - The toy punch bowl was tooled into a compote and issued in different colors in iridescent glass in 1910. In the 1950s, the toy punch set was made in milk glass, too.
Hazel Weatherman coined the AKA Thumbelina in the early 1970s.
• Motifs: (Diamonds), (Fans) 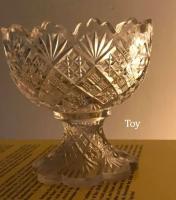 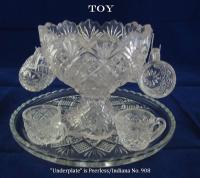 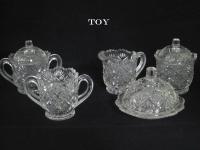 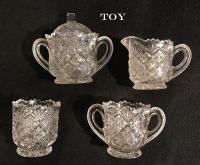 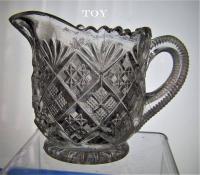